Cyprus is an island in the east Mediterranean with a population a little bit over a million. There are two communities living on this island, “Turkish Cypriots” and “Greek Cypriots”. Unfortunately these two communities are divided by a green line that was drawn by the UN in 1964 due to the ethnic conflict between the two communities (Theodoulou ,2016). Following this, a Turkish military invasion in 1974, were 36.2% of the island was captured. The “Greek Cypriots” were displaced to the South, while the “Turkish Cypriots” that lived on the island were displaced to the northern Cyprus (Turkish Invasion Of Cyprus,n.d./Theodoulou ,2016). This event has divided the country in two, leaving behind fear, bitterness, vendettas, mistrust and fanaticism that often leads to discrimination which could end up in extreme behavior (Trimikliniotis,Demetriou,2009) .”Greek Cypriot” males are forced to go to the army for 2 years(recently reduced to 14 months) as soon as they finish high school.

Forced to maintain a ‘manly figure’ and learn how to use guns to kill, regardless of how they feel, and whoever objects is often mocked and seen as weak by the society for not being willing to “protect” their country in case of war.”Turkish Cypriots” are often discriminated and victims of hate speech from some “Greek Cypriots” that feed on ignorance , false sense of nationalism, hate and discrimination their elders unconsciously pass onto them. In 2008 an attempt to bring peace to the two sides was made and the barricade symbolized the division of Nicosia between the Greek south and Turkish north was finally removed after 34 years(BBC,2003) .There have been many negotiations for a solution for years, however, the opinion of the ones who will actually live the solution, the youth, is not being heard or respected.

Still in the present day, there are many Oppressive and Negative Narratives hidden behind words or gestures that both sides of the island deal with on a daily basis. Narratives include the following: ”Each time we visit the South part of Cyprus, my mom advises me not to speak Turkish, she’s afraid we might provoke someone.” , “My grandparents would never approve of me having friends from the Southern part, they insist that I am asking for trouble and am betraying my country”, “I was attending a youth event about Unity and inclusion targeted to bring both sides of Cyprus together , however, the media and newspapers refused to cover it.” There are many other oppressive narratives happening around the island targeting both sides either consciously or unconsciously. Unspoken Narratives include the two large flags which cover an area more than 4 football fields and are located on Pentadaktylos Mountain on the northern part of Cyprus (Cyprus flag,2017). 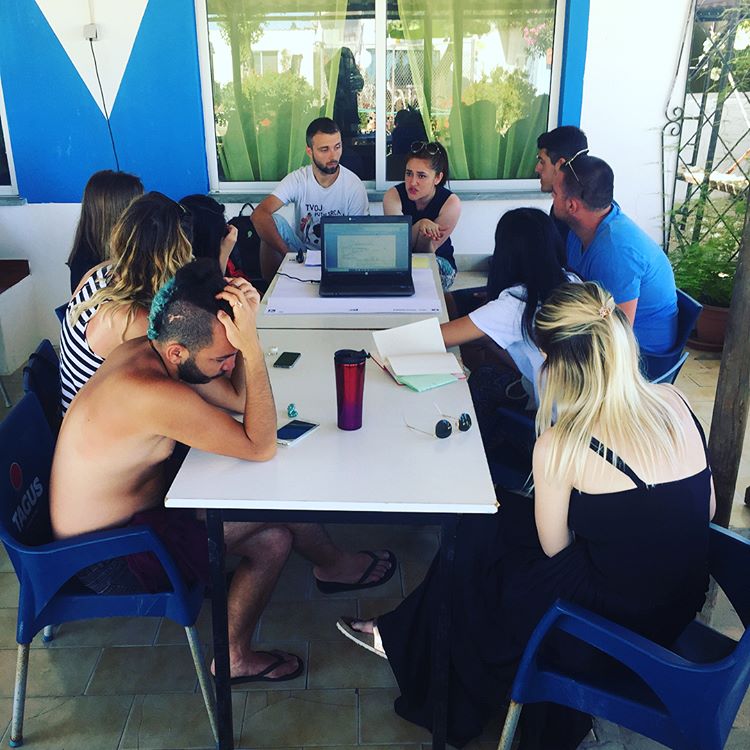 The huge “TRNC” flag can be seen from many places from northern Cyprus, it is like a constant reminder of the invasion for those who lived it and its associated with provocation, fear and sadness. Other negative narratives include the celebration of past events from both sides of the island. Although such a celebration may sound positive and aim to celebrate events that lead to independence they had a negative impact on the other community. In 2017, in an attempt to stop such celebrations, a group of Turkish Cypriots have gathered on the anniversary of 1974 invasion holding a banner that said “ There can be no celebration of pain. Face your past”. The group also wanted to read some articles but unfortunately they were removed by security (Eroglu , 2017).

This is where we come in. Differences don’t have to matter , politics aside , we want to show youth that the power to flip the narrative and aim for a better future is in their hands. We want to create an event that “Breaks the Ice” between the two communities and promote the idea of embracing a person as an individual and not associate them with politics or decisions that were made for them. Therefore we came up with a Charity event that will hold different activities that aim to bring the two sides together and empower youth. The event will hold different activities including Ice Breakers ,Simulations and activities wrapped around Human rights and hate speech.

A Donation Box will be present at the event that will be given to a Charity Organization in Cyprus towards families that are in need. We want to show people that the youth of Cyprus can get pass our differences and come together for a noble cause and the common good of our Island. Since this is an event about embracing individuality, we will not only focus on “Turkish- Cypriots” and “Greek-Cypriots” we want Everyone to join!